It's only a few days away from Halloween.  If you're like me, that means that you still haven't decided what you're going to dress up as and you'll probably end up at the thrift store Saturday morning, piecing together a costume just hours before the Halloween festivities begin.

Also during this week leading up to Halloween, you're likely going to friends' houses or gathering your family around the TV at home to watch some Halloween classics like Poltergeist, Scream, or A Nightmare on Elm Street.  These are all great choices, but I would like to take a minute to introduce a lesser known horror flick from a now famous director, Peter Jackson (yes, that Peter Jackson).

Long before Peter Jackson introduced the masses to dwarves, elves and hobbits in The Lord of the Rings, he directed a lesser known zombie film; Dead Alive.  Filmed in his native New Zealand, Dead Alive is one of his first full-length films that has gone on to earn a cult following as a dark comedy horror film.  Dead Alive follows Lionel, a timid momma's boy, as he tries to contain a zombie outbreak which begins after his mother is bitten by an exotic monkey.  A true celebration of comedy within the horror realm, this film includes a wide range of animated characters, ridiculous situations and impressive makeup and live effects, all of which have earned Dead Alive an 86% on Rotten Tomatoes and have made it my favorite horror movie.

For all you parents out there, be warned.  The MPAA appropriately rates this movie R for "an abundance of outrageous gore".  Luckily, all of the gore is balanced by a more than generous dose of over-the-top one-liners and humor.

Let us know what your favorite horror movie is on our Facebook Page! 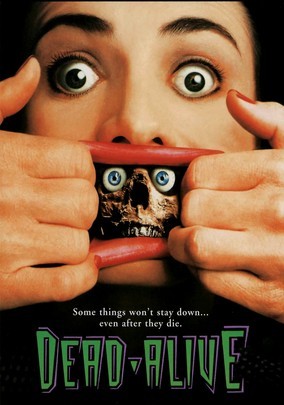 Devin and the ePopcorn.com team